Due to coronavirus (COVID-19) there have been changes to our services and programs. Learn more

“When I walked through Santiago and spotted the cathedral spires, and then arrived in the plaza 15 minutes later, I felt as if I had arrived home,” noted Wellways Camino ‘pilgrim’ Kym Murphy. “I knew I was meant to be there, and I knew all of the emotional and physical ups and downs during the pilgrimage were worth it.”

Wellways Camino trekkers—Kym Murphy, Cheryl McInnes and Tony Whyte—completed their 884 km journey across Spain, to promote ‘one million steps for mental health’, during October’s Mental Health Week. The timing was no coincidence, as the trio planned that 40 days after they began the Camino just near the French Pyrenees, they would arrive at their destination in Santiago. 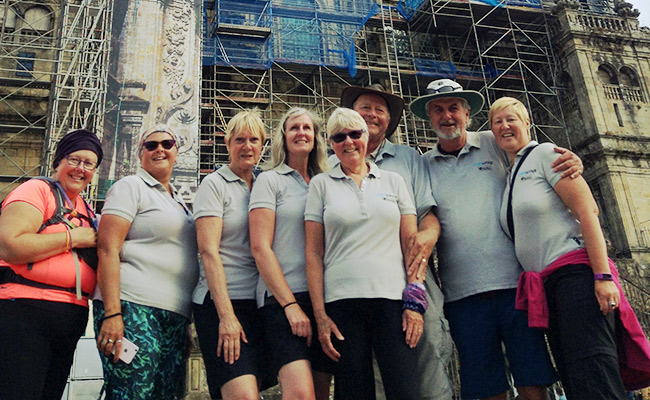 Throughout the Camino journey, Cheryl, Kym and Tony encountered people from around the world curious to learn about mental health and to talk about their own or a family member’s struggle with mental health issues.

“What amazed me about our Camino experience,” says Cheryl, “is the number of people who would come up to us—having heard of us through other pilgrims—and congratulate us on what we were doing. This was usually followed by some disclosure about a family member, a friend, an acquaintance, or just someone in their circle of friends, who was living with a mental health challenge.”

As the journey unfolded, Cheryl, Kym and Tony were sensitive to their own mental wellbeing, especially on days when they walked more than 30km in challenging weather conditions. On those days, their own plight, and that of others, was particularly poignant. “It was a constant reminder,” says Kym, “that we need to look out for one another, and when we see another suffering or having a bad day, we have a responsibility to support that person.”

Traversing changing landscapes, from the vast central tableland of the Meseta to the lush green of Galicia, and encountering the often pungent smells of the local barns and rough-and-ready farmyard practices, brought awareness to the group of the diverse conditions experienced in life. Kym noted a timely message written on a Camino way-finding sign which inspired her: ‘We are not that far if we can see the same sky.’

She reflected: “The Camino is a great leveller. Everyone is wearing walking clothes, carrying a backpack, probably looking quite different to how they would in their usual life. We know nothing about one another’s past, aspirations, families, physical health and mental health. We meet and accept people without any of the so-called ‘trimmings’ and therefore fewer judgments.”

At the cathedral mass in Santiago, attended by hundreds of pilgrims, the priest acknowledged the group’s cause and the impact of mental illness on the community. This announcement was a surprise to the Wellways group, as was the appearance of their travel sponsor, Umberto di Venosa, managing director of the Dublin-based specialty travel company, Follow the Camino. He arrived in Spain to accompany them on their walk into the city of Santiago, recording the event live, and attending the mass with the group.

While many Camino pilgrims conclude their journey at Santiago, Cheryl, Kym and Tony walked the additional 87kms to Finisterre, at the western tip of Spain.  At Finisterre, pilgrims traditionally burn an item of clothing, or their boots, to signify letting go of their worn-out belief systems, which could include fear, guilt and separation. “We become open and ready to receive a new wisdom based on inclusivity—quite fitting, given our Wellways cause and the stigma people with a mental illness can experience,” says Cheryl.

For Cheryl, Kym and Tony, the lessons from the Camino are clear: “We need to treat with kindness and compassion all those who are going through tough times. We need to de-stigmatise mental illness. We can be facilitators of the conversations that promote understanding and support for those who continue with the daily struggle to maintain their mental health.”

Wellways thanks and congratulates Cheryl McInnes, Kym Murphy and Tony Whyte for their enormous commitment to ‘one million steps for mental health’ and their determination to raise awareness of the impacts of mental illness on individuals and families.