Homeless campaign sets record
The Wellways social media campaign, “Housing is a human right, right?” recently hit a record high with 12,000 people following our call to sign a petition demanding more affordable housing. It’s not over yet, as Fundraising Manager Fiona Gillen and the team push for an ambitious goal of 20,000 signatures.

Some of the comments made by supporters include: “I'm signing because I’m nearly 70 and can’t get housing commission. I rent private whether I can afford it or not,” Gloria.

“I'm signing because older Australians were never offered superannuation nor was it high on the list of everyday living (priorities) and they are now paying the price. The pension is not enough to live on given the high cost of rent,” Lorraine

Add your voice to the campaign here: Affordable housing campaign

Praise comes from the top
It’s not always good to be named in Parliament, but Wellways had a positive mention recently delivered by ACT Mental Health Minister Shane Rattenbury. Speaking about the Wellways Detention Exit Community Outreach (DECO) program, Mr Rattenbury said it was “an example of a program that can provide significant cost savings to the Territory and also produce better health outcomes for former detainees.

“We have also received positive feedback on the extension of the support period from (three) to 18 months, with this extended timeframe allowing case-managers to engage more extensively with participants across a wider number of domains including employment, living skills, self-esteem and socialisation,” he said.

The Detention Exit Community Outreach program has run in the ACT since 2015. Most participants have been men with a diagnosis of severe mental illness. Many have a history of substance abuse or misuse, did not finish high school and/or have spent half their adult life in detention.

Since 2015, of the 81 people who have participated in the voluntary program, six (7 per cent) have reoffended and three (3 per cent) were returned to detention after they breached parole conditions.

The figures are in stark contrast to broader recidivism rates. The most recent Productivity Commission data showed almost 40 per cent of ACT adults released from prison returned to jail with a new sentence within two years.

Mr Rattenbury also recently visited both the youth and adult “Step Up, Step Down” services operated by Wellways in the ACT. Both programs are funded by ACT Health and provide 24-hour recovery-focused residential mental health program for people experiencing severe mental illness.

Wellways is the largest private provider of government-funded community mental health services in the ACT and last year our programs helped more than 140 people with mental health issues and provided hundreds of short-term stays to people.

We help to Reclaim the Lane
Annual youth arts festival Reclaim the Lane in Devonport celebrates young people. Wellways was there represented by Child, Youth, Family and Engagement team members Dearne Radford, Nathan Langley (program workers) and Shona Becker (team leader). The biggest drawcard was the Wellways mural with its “Say no to Bullying” message. People got messy and added their handprint to a colourful mural.

Sunny days away to focus on wellbeing
The Wellways Frankston office in Victoria recently organised a two-day camp for participants held on the Mornington Peninsula. The camp’s focus was on health and wellbeing, with experts discussing exercise, nutrition, healthy eating, along with cooking and budgeting. Participants had a lot of fun and made some new friends. The team has received great feedback and we understand some of those on the camp have made positive changes to their lifestyle and are putting their new cooking skills into practice.

Also in Frankston the weekly meeting of the coffee/walking group was combined with a day trip to the Arthur’s Seat Sea Eagle chairlift, which challenged those who feared heights. As one person who took the test said afterwards: “I am so proud of myself.” Meanwhile, another said it had been her first break in years: “I haven’t had a holiday for eight years - this is a holiday for me.”

On the road to recovery 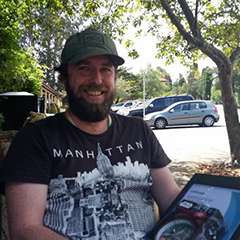 Andrew has been a participant in the Wellways Enhanced Adult Community Living Support Service program for 18 months. The program is offered in the Illawarra, Shoalhaven and Murrumbidgee regions of New South Wales and provides case management and psychosocial support to adults experiencing mental health issues.

Andrew has come a long way in his recovery and recently earned a certificate of appreciation for his efforts. His Star Wars Wookie alarm clock, not only has authentic Wookie sounds, it also assists with time management, which is all part of the program, says Wellways recovery support worker Matthew Short. “Andrew’s recovery is a credit to his strengths,” Matthew said.